Venue:The Phoenix
We start with The Phoenix Denmark Hill, a cosy venue attached to the side of Denmark Hill train station, a bar/restaurant. The first act to be heard by us at this venue was Antarma a solo artist performing a mixture of acoustic songs and Djembe drums and melodic chant. Antarma's performance was extremely uplfting with positive, healing lyrical content which was well suited to the family orientated venue. The Next act to follow Atarma at this venue was The Hazeltones a  wholesome and smooth 3 piece band which comprises of siblings two sister’s and a brother playing the Bass, Drum’s and the Piano, not quite the Jackson 5 in number but in talent and dedication these siblings are are band to watch! The Hazeltones performed mix of genres on the night, their statement performance was the cover of the popular chart single Louder by DJ Fresh. This performance clearly rocked the venue, not only did the lead own the stage but she got the attention of the audience this performance. Best described here by us at Creative Happen as breathtaking.
Venue: The Crocked Well
The next act we had opportunity to experience was Soneni & The Soul a fabulous four piece band at The Crooked Well, a lovely welcoming venue. A truly apt venue for the luscious, soulful, soothing sounds of Soneni & The Soul, accompanied by a courteous audience these factors created a lovely environment. The band were brilliant, their live perform far excelled what I was expecting, although I knew they would give a good performance. I loved them in this live context soneni's smooth vocals cominbed well with live band, I must say a little far removed from what is available of the band on You Tube. If it wasn’t for the night's agenda and a list of duties I would have happily found myself sitting, sipping and smiling while soaking up some of the delicious audible nectar produced by this four piece. Alas! the arms on the proverbial clock hath shifted, and the next stop!

The Tiger a much more eclectic an energetic environment set in a rather sizable gastro-pub of sorts’. We enter to find Michael Armstong -Take Over Manager on stage introducing The Glyphs a band which caught our attention on the approach to the event as a  band to watch, on the strength of their sound an interesting two piece act consisting of lead singer Mark Walsh and producer Matt Wilkie tipped as a band to watch by The Blue Walrus Blog, they are categorised as Folktronica/Dubstep. An original sound that sounds well established within its own style, energetic and fresh, for those that like dance music this is a certified yes!
Venue: Joiner's Arms
After the Glyphs performance we made our way to the Joiner's Arms to take in some of the Joe Inman project, a relatively young four piece band with somewhat of an arctic monkey's esque sound, a little less accomplished within their sound as the previous band, which is a good thing if you ask me as these guys are young enough to have time to evolve their sound to the point they may become serious contenders of the future, delivering quite solid lyrics with a guitar driven score a good way to spend an evening with a few friends and the poison of your choice.

On to the next stop, The Phoenix to see Ruby Tuesdees but on our way a quick detour was in order as we  had an opportunity to meet Baroness Tamara Von Stein Zu Leitershofen who happened to onstage as we passed, so on entering the Crooked Well we are met by a vibrant colour co-ordinated lady effortlessly expelling operatic notes but on closer analysis to my surprise the subject matter was of a comedic nature totally throwing me off kilter in a good way, instantly invoking a smile on my face which led to an undeniable chuckle, Baroness Tamara then proceeded to gently coerce a member of the audience to join her on stage for what was to be a fabulously funny operatic skecth culminating in two members of the audience on stage perfoming their parts as an unassuming audience member would, a truly comical experience for everyone.

When we actually arrive at The Phoenix to our dismay we found that the schedule for the phoenix seemed to have fallen out of sync with the literature so we had reached to find much to our disappointment Sam and Chris of Ruby Tuesdees walking around the venue enjoying the rest of their evening having already performed what I can only assume was a good set. Consoling our disappointment by having a little drink and a few words with the guys before heading off.

Venue: The Joiners Arms
The next act that we saw was Paul Lisak and After the Ice at the Joiners Arms an act that we were looking forward to seeing, Paul and his band begin to play rifts and guitar melodies.Their melodic rifts echoes that of American Band Sonic Youth, who we have been documenting for the last few years, not so much the vocals but still a very good sound and the decent subject matter and measured delivery really combined to produce a good performance, the crowd could have been a shade more courteous and maybe held some of their full blown conversations till maybe after the performance, but in all a fully enjoyable performance.


Then to pop down the street to see Abigail Hardiman an acoustic singer songwriter, at a tender age of 18 I found that Abigail had a very experience air about her, then she began to sing to my absolute delight she posses a lovely voice and very powerful lyrics which almost suggest that Abigail has been hear before touching on subject and scenarios that are right at home among the mid Thirty lot although the music will communicate effectively to music lovers of all ages, I have a strong desire to hopefully hear Abigail’s music streaming across the airways a definite contender of the near future her music could really cause a stir if released in to the charts. Which brings me to my final note on Oxjam Takeover Camberwell 2011, Hats to Michael Armstrong, Tracy Alvares and the Rest of the Camberwell team for putting together such a vast amount of good talent, organising the venues along with promotion and publicity a totally fabulous event something definitely worth planning in for next year. 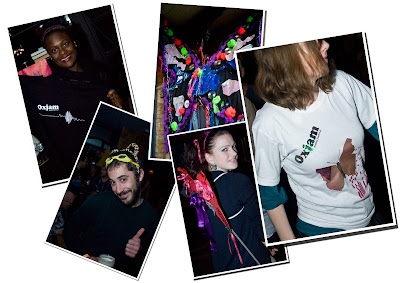